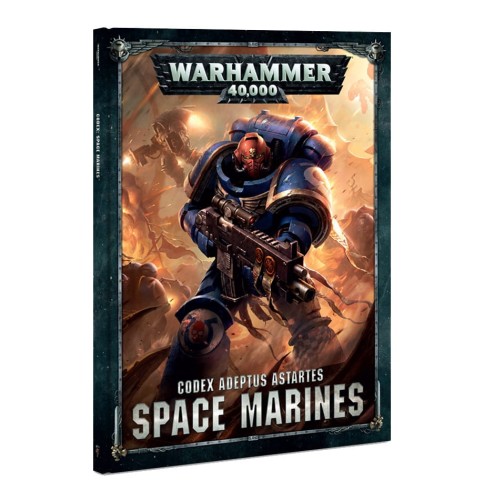 Availability: 1 item in stock
Dispatched within: after completing the order
Price: €16.67 16.67

Codex: Space Marines is a 208-page hardback containing a wealth of background and rules – the definitive book for all Space Marines collectors.

This book contains everything needed to get a Space Marines army ready for war! A huge collection of rules content is within:

- 85 datasheets covering the entire Space Marines range – including the Primaris Space Marines;
- Points values for all miniatures, weapons and wargear for use in Matched Play games;
- Army abilities and wargear lists, alongside a brief explanation of their use and the use of keywords;
- Rules profiles for every piece of wargear and every weapon in the Space Marines’ arsenal;
- Rules for Battle-forged armies, including abilities for Space Marines armies and specific Chapter Tactics for Ultramarines, White Scars, Imperial Fists, Black Templars, Salamanders, Raven Guard and Iron Hands Chapters, reflecting their unique fighting styles;
- 26 Stratagems for Battle-forged armies, reflecting the varied tactics used by Space Marines commanders on the battlefield;
- 6 Warlord Traits, for use with any Space Marine Warlord, with Chapter-specific Warlord traits for Ultramarines, White Scars, Imperial Fists, Crimson Fists, Black Templars, Salamanders, Raven Guard and Iron Hands;
- Chapter Relics: special weapons and wargear wielded in battle by Space Marines characters;
- the Librarius psychic discipline: 6 psychic abilities for use by Space Marines Librarians;
- 6 Tactical Objectives for use by Space Marines armies.