CRUSADER KINGS THE BOARD GAME - THE ROYAL BUNDLE 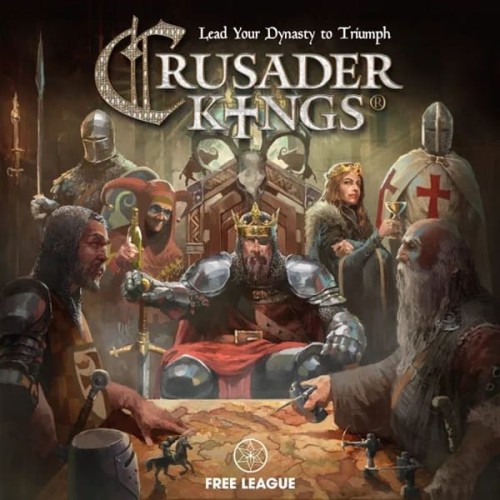 NOTE: This is a pre-order. The game will be shipped to you in August.

This bundle contains the core set of Crusader Kings The Board Game and the Councilors & Inventions expansion with 24 bonus miniatures, at a discounted price!

My King, the time has come. Your day is now. Are you ready to make your mark on History?

Free League Publishing and Paradox Interactive are proud to present Crusader Kings The Board Game, based on the acclaimed grand strategy computer game. In this game, 3–5 players lead the historical dynasties of medieval Europe to triumph - or downfall.

You are a Crusader King, striving for wealth and power across the continent. Across generations. Reshape the history of medieval Europe in your own image – if only that dimwitted son of yours set to inherit the throne doesn't spoil your grand plans...

Crusader Kings – The Board Game captures the essence of the Crusader Kings experience, in a physical tabletop format. This is a strategy game at heart, but with a special focus on characters, intrigue, and juicy medieval drama. It’s a big, beautiful game centered on a map of medieval Europe, using hundreds of cards for actions, characters and events and 70 plastic miniatures to represent knights, armies, castles, and more.

To win, you will need to groom your family, build mighty castles, develop your dominion, be shrewd in the realm of diplomacy and intrigue, and use your vassals wisely to grow your wealth and military power. You must survive invasions, plots, plagues, crusades to the Holy Land – and  marriage! Or at least have children or siblings standing by to take over the throne if your regent dies. Failure to raise a suitable heir can mean the end of your dynasty.

Crusader Kings – The Board Game boils down the unique strategy/RPG combination of Crusader Kings to an intense tabletop experience of 2-3 hours. The game rests on four core pillars:

RockPaperShotgun
"It’s an appealing premise: all of Crusader Kings’ drama and intrigue in the length of time it takes me to get through a couple of years of the PC game. The real hook, though, is the social layer, with everyone looming over a map, making pacts and plotting in whispers. Crusader Kings The Board Game does what Crusader Kings 2 just simulates."

PC GAMER
"It’s very much the kind of story engine that fans of Crusader Kings on PC will enjoy. In just a handful of plays of the game I’d seen the kinds of stories that you play dozens of hours of the PC game for. I saw a king of England assassinated and married off three awful daughters to make room for a useful heir in my crowded house. … Overall, Crusader Kings felt like a game that was true to the PC legacy while shedding the more onerous simulation of a grand strategy experience for a sleeker form. "

BLEEDING COOL
"It does do a fantastic job of capturing the CK spirit."

PASTE MAGAZINE
”Crusader Kings, a sort of Diplomacy meets hand management meets soap opera title … There’s a very high interactive component in Crusader Kings, and the idea of a map game that doesn’t just rely on who takes over the most regions is very appealing.”