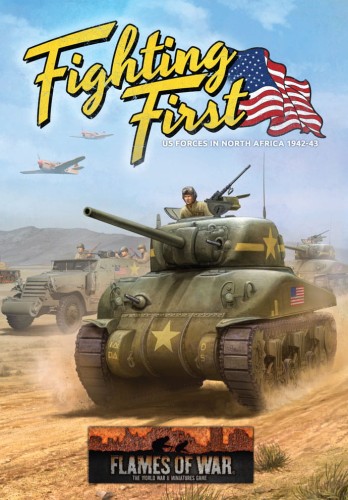 Availability: 1 item in stock
Dispatched within: after completing the order
Price: €12.80 12.80

The latest Mid War book for Flames Of War 4th Edition is here. Fighting First is 52 pages and covers the American forces fighting in North Africa through the Tunisian campaign.

The Mid-War Americans date right back to the first version of Flames Of War, with the books Old Ironsides in 2003, covering armored forces, followed by Stars and Stripes in 2005, which added infantry forces.

A lot has changed since then, of course, and the latest book brings the US Army up to date with the most recent edition of the rules. In doing so, it will bring a lot of added variety to Mid War battlefields, which is sure to be welcome.

Fighting First covers the US forces in North Africa throughout Tunisian Campaign, from the initial landings in Operation Torch, through their painful baptism of fire at Kasserine Pass, their redemption in the Battle of El Guettar and the eventual triumph with the final defeat of the Axis with the capture of Tunis.