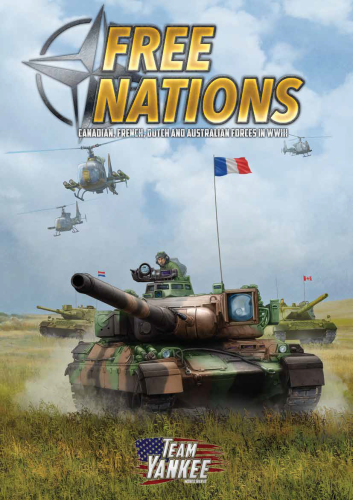 Free Nations is a 98 page A4 hardback book for NATO forces in Team Yankee.

Since its inception in 1949, NATO has been a community of free nations brought together with a common goal, to defend the freedom of Western Europe and North America. To do this Canada, France and the Netherlands deploy armoured and mechanised forces in West Germany. Old allies have also been called
on, and an ANZAC Brigade of Australian and New Zealand troops answers the call to fight.

Canada, the Netherlands, and Australia all have 105mm armed Leopard 1 tanks, while both Canada and the ANZACs have M113 mechanised infantry. France has its own 105mm armed AMX-30 tank, while infantry travel in AMX-10P IFVs or 4x4 VAB APCs. The Dutch also have new Leopard 2 tanks and mount their infantry in YPR-765 IFVs.

INSIDE YOU WILL FIND:
Background on the 4 Canadian Mechanized Brigade Group, French Armée de terre, the Netherlands 1. Korps, and the Australian and New Zealand ANZAC Brigade.