INTO THE VALLEY OF DEATH + 17TH REGIMENT SET 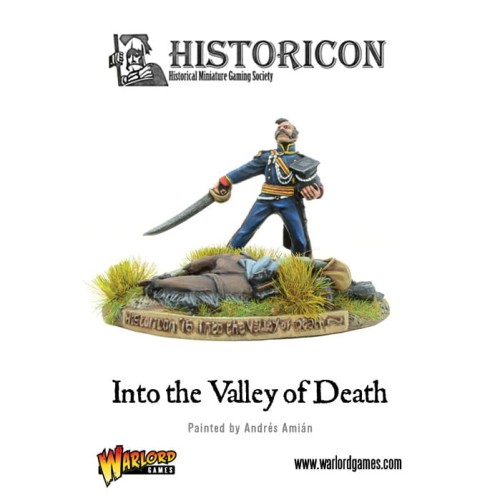 INTO THE VALLEY OF DEATH

As in previous years, in 2016 Warlord Games has produced the exclusive show miniature – based on George MacDonald-Fraser’s scoundrel ‘hero’ Harry Flashman at the Charge of the Light Brigade, Battle of Balaclava 1854.

Suffering from the effects of the heady concoction of fear and the previous evenings over indulgence in champagne, Flash once again finds himself in peril when he is unhorsed at the head of the glorious charge of the Light Brigade at Balaclava. Springing to his feet, our hero whips out his sabre and, er, offers it to his captors as he splutters “Friend! Don’t hurt me!”.

The 17th was part of the Light Brigade, under the command of Major-General Lord Cardigan, which landed with the British forces at a place known as Calamity Bay. It took part in a minor skirmish at the Bulganek River and subsequently took part in the Battle of Alma on 20 September.

During the Siege of Sevastopol (which began in September) the 17th Lancers took part in the Battle of Balaklava on 25 October. During the battle the regiment took part in a cavalry charge that became known as the Charge of the Light Brigade.

The 17th Lancers, commanded by Captain William Morris, drove through the Russian artillery before smashing straight into the Russian cavalry and pushing them back. The Light Brigade were unable to consolidate their position, however, having insufficient forces (the Heavy Brigade had not advanced further into the valley) and had to withdraw to their starting positions, coming under artillery and musket fire and cavalry attack as they did so.