LEGEND OF THE FIVE RINGS RPG: SINS OF REGRET 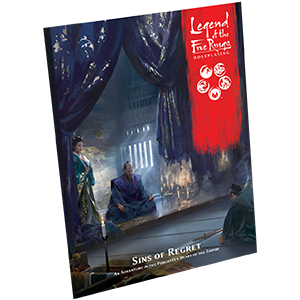 Escape the ghosts of the past in the Sins of Regret adventure for the Legend of the Five Rings Roleplaying Game! This 32-page book takes you to the troubled village of Twin Blessings. Here, the elements are imbalanced, the crops fail, bandits prowl the woods, and still the daimyō demands his due. But Lord Jikai faces troubles of his own as duplicitous vassals and restless spirits threaten to unseat him. If you help Jikai hold his power you may win his favor or even prove yourself worthy of the lord’s patronage, but is the daimyo worthy of your assistance? What does Bushidō demand in the face of this looming conflict? Only you can decide which path you will take. Does your loyalty belong to the villagers, the lord, or yourself alone?

As you prepare to send your outcasts into the beautiful but dangerous land of Rokugan, Fantasy Flight Games also offers you a new pre-built companion adventure to throw you into the action with Sins of Regret. This story—which can be used for all player characters but works particularly well for rōnin—takes your adventurers to the small village of Twin Blessings, a town that has fallen on hard times since the elements became imbalanced. The crops fail, bandits prowl the woods, and the daimyō demands his due. Have these people fallen out of favor with the kami or is a darker force at work?

The villagers seek an intermediary to voice their concerns to their unjust ruler, but Lord Jikai faces troubles of his own. Within the halls of Closed Shell Castle, duplicitous vassals threaten to unseat his rule, and ghosts from the lord’s past have returned to haunt him. If you help Jikai hold his power you may win his favor or even prove yourself worthy of the lord’s patronage, but is the daimyo worthy of your assistance? Whether you are rōnin or a samurai loyal to your Clan, you will be forced to test your commitment to Bushidō in the face of looming conflict. It is up to you alone to decide which side you will take. Will you support the suffering villagers in their defiance of their lord, defend Jikai's authority, or will you fight for your own gains?

As you grapple with the complex disputes brewing around you and your own internal struggles, Sins of Regret helps you keep your adventures organized with more than fifty tokens to help track the various non-player characters you may encounter. As each side becomes more heated and the quarrel comes to a head, these may help with the vital task of distinguishing friend from foe and help you keep the conflict contained. This town is a powder keg—if it should explode into all-out battle, you had best be on the right side.