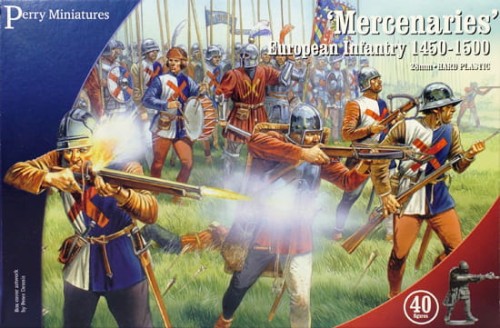 This new box contains 40 multi-part figures which can be assembled as pikemen (up to 18), crossbowmen (up to 12) and handgunners (up to 12 models) as well as command. It includes 12 european polearm heads which are designed to customise the arms carrying pikes, also seperate pavises, targes/ bucklers and sword arms. Designed to be used for the bulk or part of many european armies such as Burgundy, Switzerland, France, the Holy Roman Empire, the Low Countries, Italy, late 15th century Spain and mercenaries fighting for both sides during The Wars of the Roses.