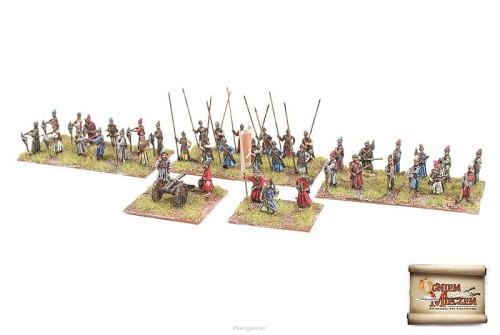 Availability: only one left
Dispatched within: after completing the order
Price: €21.43 21.43

Soldats were one of the ”new pattern” units. As a pike and shot formation organized according to Western European lines they were considered to be well-trained and had significant firepower. Matchlock muskets and rapiers were the main armament of infantrymen and pikemen were equipped with pikes, breastplates and helmets. In addition some of the soldats were equipped with berdishe axes. In the second half of the 17th century this formation became the core of the Muscovite army. Soldat regiments were usually led by officers from Western Europe: the German states, England and Scotland. Privates were recruited locally, also from among Cossacks and Tatars. Soldats received weapons, gunpowder and lead from the state but had to provide clothes on their own so most regiments were not dressed uniformly.