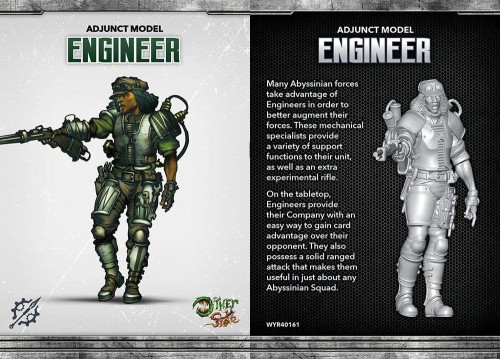 The Abyssinian Empire was born in Ethiopia, on the east coast of Africa, hundreds of years ago, but its rise to prominence in Africa (and the rest of the world) came in the 1800s. With the world thrown into chaos with the opening of the Breach and the subsequent Black Powder Wars, Abyssinia began rapidly expanding its borders. Now, with the rise of the Burning Man, Abyssinia has decided to once again expand their global reach.

Abyssinians are the masters of Soulstone technology. A temporary breach to the world of Malifaux in the seventeenth century gave them access to Soulstones years before anyone else, though they kept this a closely guarded secret. This fueled innovation and led to Abyssinia being the most advanced nation on Earth. The Abyssinian army is a mix of elite troops and machines of war, able to fight effectively in melee or at range.