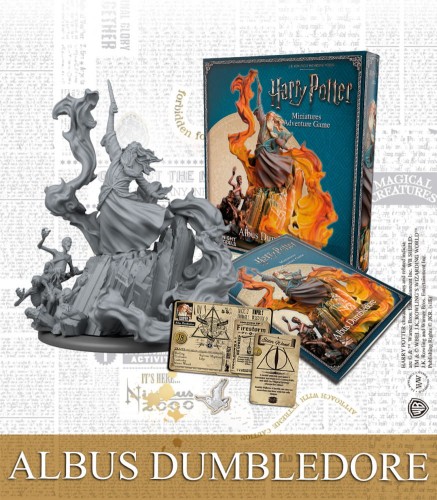 Considered to be the most powerful wizard of his time, Albus Wulfric Percival Brian Dumbledore – to give him his full name – was the headmaster of Hogwarts for a period that encompassed both of Voldemort’s attempts to take over the Wizarding World.

This finely detailed Albus Dumbledore resin model depicts the Hogwarts headmaster at the height of his powers. Wielding the Elder Wand, Dumbledore can be mounted on a regular 30mm base, or placed on an impressive centrepiece large base, representing Dumbledore using the powerful Firestorm incantation, with which he vanquished the sinister Inferi at the Crystal Cave.

The set includes two Character Cards, one for each base type, giving you more tactical options when choosing Dumbledore as part of your Group. The Albus Dumbledore box also contains a new scenario, artefact card, and complete assembly instructions.