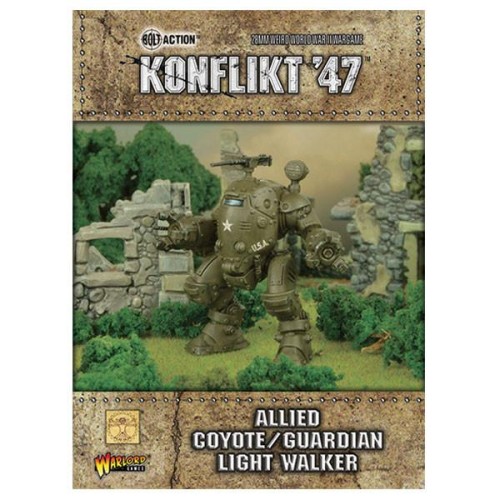 Since its introduction in late 1945, the Coyote has served with distinction in all theatres and environments. Manouverable, well-armed, and mechanically reliable the Coyote has proven adaptable to any combat role, from recce to urban assault.

Armed with 2 fists, a light machine gun, and a forward facing heavy machine gun, it's an agile light walker used by both US and British forces (known as the Guardian). Tactically deployed to support your platoons singularly, it's a potentially devastating combination as a platoon.

A variation of the US Coyote light walker, the Guardian is used by the British to support infantry in close terrain and assaults. Heavily armed, mounting an MMG and infantry Flame Thrower plus its fixed forward HMG, it is somewhat limited by its crew of one. Nevertheless this light walker is versatile and popular with the troops it supports.