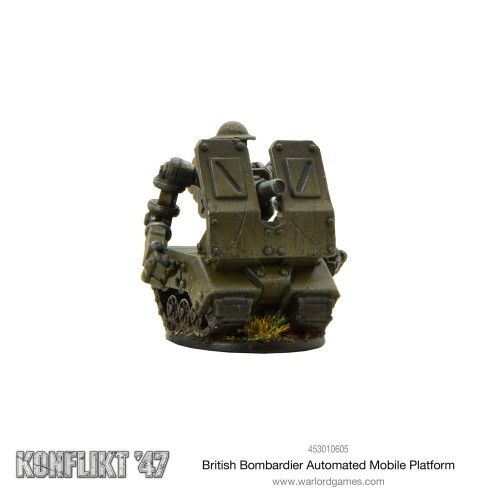 Having succeeded in automating an armoured carrier, the British Rift-tech Division looked to develop the concept further, combining the continuing improvements in AI technology with a purpose-built chassis capable of carrying several weapon systems in a universal mount. This would allow rapid changes in weapon load to suit specific missions. Originally conceived as a walker with legs, Rift-tech advances, and an experimental track design have resulted in a highly agile tracked chassis that gives more stable, but comparable manoeuvrability.

After successful trials, the Automated Mobile Platform or AMP was declared combat ready and three weapon loads were finalised. The Bombardier carries a light howitzer. The AMP’s design allows it to manoeuvre its gun shield to better protect itself from fire, particularly when stationary or when attacked from the flanks. As the AMP usually operates in packs, up to two AMPs can be selected as a single light walker selection.