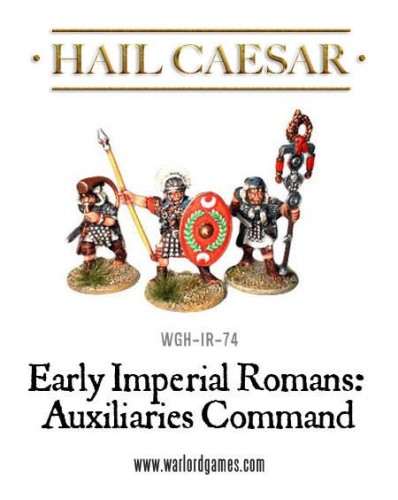 Auxiliary troops fought in line much like their legionary counterparts and were not, as is fashionable to suggest, lesser quality troops - in fact they were the equal of the legionary in training, drill and combat capability.

Recruited initially from free provincial Roman subjects they went on to be recruited from the indigenous population as the Legions conquered new territory. It was not uncommon to see Celtic auxiliary units.

Armed with their spear, gladius and protected by a chainmail coat and their distinctive oval shield the auxiliary cohorts performed sterling work in the name of the various Emperors!

The Auxiliary Command pack contains a Centurion, Cornicen, Singifer and a signum standard.