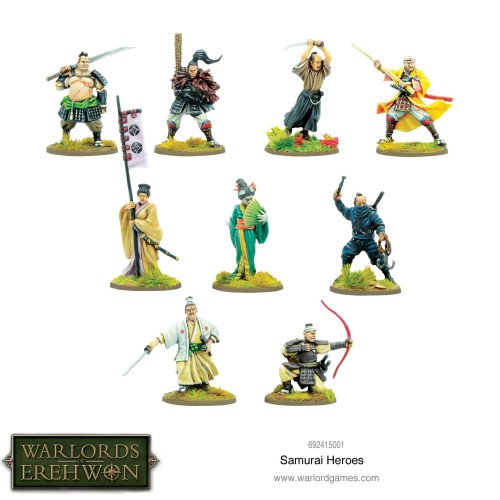 This fantastic set provides you with a great selection of heroes for your warband, from the noble Daimyo to the sneaky Ninja Master! These models are bursting with character, and give you plenty of options to choose from when building your army. Each one of these models is covered with little touches, from scabbarded throwing knives on the ninja master to the adornments in the Geisha's hair.

One player asked whether it was permitted to field a force of seven heroes in the style of the Seven Samurai. Such masterless Samurai were known as Ronin and we thought it was worth presenting players with the option. This isn’t really necessary because as with all our Erehwon warbands, players are always at liberty to choose to ignore, modify, or create whatever forces they want so long as all involved are happy to go along with that approach.

As with the inclusion of monsters from the Monster list and other variations of warbands, we therefore say that this option is available if your opponent agrees - and leave it to you to make arrangements for yourselves.

If you want to play the Ronin variant simply choose seven Shugyosha and nominate one as your Warlord. The Warlord receives no extra rules or abilities, but every Warband needs a Warlord and so our seven heroes must choose one amongst them who is their leader. You can use any points remaining to buy non-Samurai units including monsters from the list if you wish. Bandits, Ashigaru or Archers might equally well be armed villagers or peasantry - we shall not enquire too closely. You can also include an Onmyoji - who in this case might be a village wise-woman or local priest - let the story of your Seven Samurai suggest a cast to match.

In this set, you'll get nine fantastic metal miniatures (some of which you may have seen before), which are perfect for either Warlords of Erehwon or Pike & Shotte.

Heroes on the Battlefield

Using the figures in this pack, you can add a Daimyo, Onmyoji Diviner, Shugyosha Samurai Hero or a Ninja Master to your warband - using extra figures to represent Hatamoto bodyguards or unit leaders.

Choosing a hero to lead your army is an important consideration - do you need a bow-wielding samurai to snipe enemy characters or monsters, or a heavily armoured daimyo to lead the charge and hack into the enemy battle line.

Specialists like the Diviner or Ninja Master have a wide array of special abilities that can give you an edge over your opponent!