STRONTIUM DOG: THE GOOD, THE BAD & THE MUTIE STARTER GAME 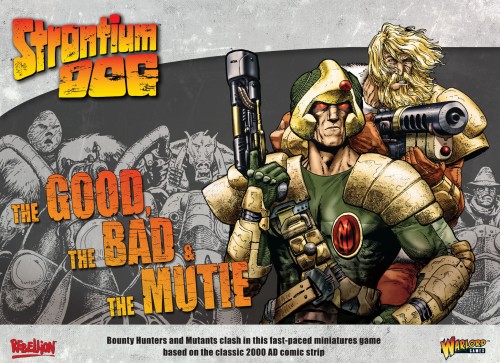 Following the Atomic War of 2150 the world is a nuclear wasteland. The survivors have re-built their lives, but many were warped by the mutating effects of Strontium 90 fallout. Unable to live or work amongst the  'norms', these mutants were forced to grow up in ghettos and take the only job open to them - bounty hunting! These Search/Destroy Agents (Strontium Dogs) hunt the criminals who are too dangerous for the Galactic Crime commission.

One such Strontium Dog is Johnny Alpha, whose eyes emit piercing Alpha rays and enable him to see through solid objects. Join Johnny and other SD agents in this fast paced narrative driven game of gunslingers, adventurers and criminals in the post apocalyptic future!

This fast-paced tabletop miniatures game allows two or more players to fight out scenes from the Strontium Dog universe defined by legendary comic creators John Wagner and Carlos Ezquerra. Players take control of a small team of bounty hunters or the outlaws, criminals and renegades they hunt in gun battles, chases and showdowns across the galaxy.

This starter game is based around the classic confrontation between mutant Search/Destroy agents (AKA Strontium Dogs) Johnny Alpha & Wulf Sternhammer and the infamous Max Bubba’s gang – a pivotal storyline within the pages of the galaxy’s greatest comic – 2000 AD.

Containing all the game rules, a scenario booklet to help you learn the game and refight the S/D Agents’ showdown with their mutant foes, as well as superbly detailed miniatures to fight over the solar farm scenery, this is a great way to get started with your Strontium Dog games.