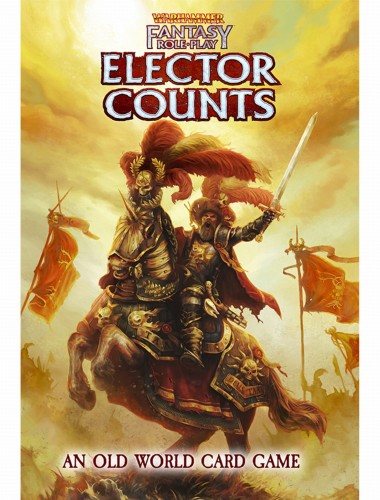 Fight for control of The Empire

A new standalone card game, set in the Old World and designed to mimic card games enjoyed by ruffians, gamblers and adventurers in inns and taverns across the Empire!

Watch our intro to Elector Counts on Youtube here or our full play through video here.

Suitable for 2–4 players, Elector Counts contains everything you need to vie for control of the Empire. This box contains a set of English rules, 112 game cards, a set of tokens and a player aid card.  Elector Counts is a great companion game to enjoy between your adventures in the Old World and can also be enjoyed by those who do not play Warhammer Fantasy Roleplay.

The cards are gloriously illustrated in art new and old, with iconic pieces joining novel depictions of the loyal soldiers, iconic locations and famous personages of the Empire.

The old Emperor is dead, and his successor is anything but clear. In the halls of the powerful, diplomacy has failed, civil strife is rampant, and the trumpets of war ring loud and clear!

Fight for control of The Empire, securing your holdings with faith, steel, and gunpowder. Who among the Elector Counts is worthy of ascending to Sigmar’s throne?